Let me just start this post by saying I sooooooo missed Istanbul.  As much as I love the sleepy comforts of Kansas and Alabama, as well as my peaceful lojman at work, I was desperately needing a dose of hustle and bustle in my life.  It was so comforting to hear the buzz of traffic and see the familiar skyline full of minarets and seagulls. 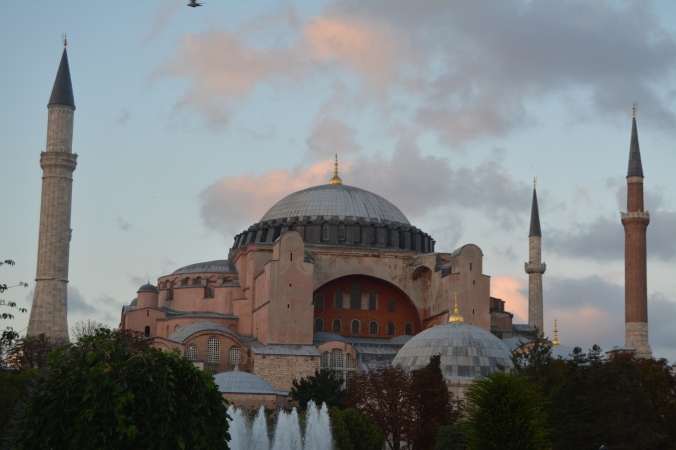 I will be honest:  I was a little nervous.  With everything that’s been going on in Turkey (and especially with all of the crazy press this summer), I wasn’t really sure what to expect.  I was definitely concerned about the possibility of anti-American or even plain old anti-foreign sentiment.  I am so pleased to say that it has been nothing but a warm welcome back!  All of our favorite locals were happy to see us and even in Istanbul, nobody thought twice about having American visitors.  It just goes to show that you have to take the media with a few grains of salt sometimes.

I’m a little ashamed to say that for as many times as we’ve been in Istanbul, there’s a whole lot we still haven’t seen.  In fact, prior to this weekend, we had only ever visited Sultanahmet once, which is literally insane.  I just love the Asian side so much and end up spending most of my time there because it’s less touristy and has great restaurants (it’s all about the food, right?).

Our very first weekend here, we made a beeline for Hagia Sophia and The Blue Mosque because that’s really all we knew about when we first came.  This year, we want to make it a point to see a lot more of what this fabulous city has to offer…because seriously, a year?  We’ve been here a year!

Fun fact:  if you are a legal resident of Turkey, you can get a museum card that gets you into pretty much every major museum and attraction in Turkey for free for only 50 lira (which is less than $20)!  It costs that much just to see Hagia Sophia alone!  Totally worth it!  It also comes with a list of every place you can visit, so we’re determined to check off as many things on that list as we possibly can.

After brunch with friends on Saturday morning (yay menemen!), we decided to kick things off with a visit to Topkapı Palace, a massive and beautiful example of Ottoman style and architecture.  We had heard our students and co-workers rave about it forever, so it was long overdue.  Also, it was an absolutely gorgeous day, which was perfect for slowly wandering through all the courtyards.   I loved all of the colorful tiles and touches of gold on everything.  My personal favorite was the armory, although we weren’t allowed to take pictures in there. 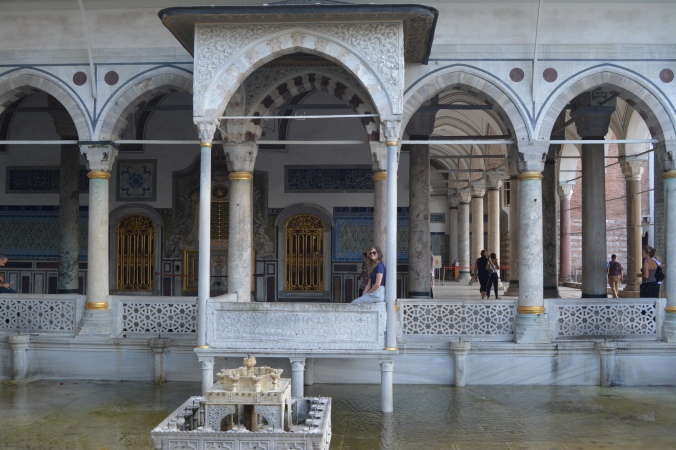 Trying to see everything was a bit ambitious   The treasure section was closed for renovation and we weren’t able to make it to the harem (because I guess it requires a separate ticket), so we already have plans to go back to see the things we missed on this trip.

After spending the night in Fatih, we got up the next morning to see another one of Istanbul’s treasures:  Basilica Cistern.  For me, this was the highlight of the weekend.  I don’t know how one place could manage to be so cool, creepy, magical, and romantic all at once, but it was.  The dimmed lighting, big fish swimming, and narrow walkways gave it an odd sort of charm that’s difficult to explain.  There was even a wishing pond!  I just happened to have a genuine American wishing penny in my purse left over from summer, so I happily tossed it in.

My favorite part of the cistern was definitely the Medusa columns.  Apparently, they were excavated from another site and just added into the cistern when it was built.  There are rumors that the two heads were placed at different angles to avoid the Gorgon’s gaze, but it seems more likely that it was just easier to make the columns even with that positioning.  Still, it’s fun to speculate.  I was a huge Greek mythology nerd when I was younger, so I couldn’t help but be excited while we were there.

Last but not least, we finished off our weekend with a little necessary shopping and some good food.  Even though we just got back from the States, I can’t go to Akasya and not get Shake Shack, so American food it was.  I mean, you can get (beef) bacon and root beer floats.  I’m also pretty stoked that Macro Center seems to be getting more of a selection in their stores.  I found Hershey’s cocoa powder, sweet potatoes, blueberries, refried beans, and even a small selection of pork products!  All things I couldn’t ever find last year.

Turkey is feeling more like home than ever!  I’m so glad to be back.