It’s been difficult to post lately.  Life has been a little heavy.  Between end-of-the-year stress and goodbyes and the recent tragedy in Orlando, I’ve felt uninspired and out of sorts.  I’m working on doing some self-reflection, meditation, and a dash of creative therapy so I can find a way to infuse the world with some much-needed light and positivity.

One thing that really lifted my spirits recently was a Turkish cooking lesson with some dear friends here at the school.  It was one of those perfect rainy days to be inside with food on the stove and some good company.

First, we learned how to make mercimek çorbası, a simple and delicious lentil and vegetable soup that tastes extra awesome with some red pepper and fresh parsley.  Honestly, this could have been a meal in itself for me.

Next, we made a sort of eggplant moussaka dish that our host could not really find the name for, but it was amazing, so we just rolled with it.  It mainly consisted of fried eggplant and tomato and also included some onion, garlic, ground beef, and spices.

There were mucver, cheese, dill, and zucchini patties.

Kısır, a tasty bulgur side dish loaded with spices, tomato sauce, and lots of fresh herbs.

And my favorite of the night – sarma.  These were just as fun to make as they were to eat. There was something so relaxing about filling and rolling the vine leaves over a nice, long chat.  I think sarma therapy needs to be a thing.  Also, the end result is fantastic.

The meal was extra epic because it’s currently Ramazan – the Muslim holy month where most people fast from sun up to sun down- so everyone is ready to eat when iftar (the breaking of the fast) rolls around.  We enjoyed some special Ramazan pidesi with our meal and followed it up with some kadayif (a syrupy dessert) and tea while we watched the Iceland vs. Portugal football match and debated whether or not Ronaldo is actually a robot (I mean…the man’s face doesn’t move). 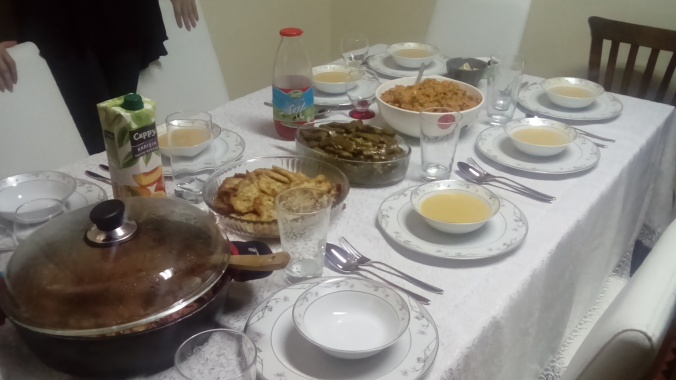 There have been moments lately where the world feels like a doomed and confusing place and it can be difficult to remember all of the things I have to be grateful for, most notably all of the amazing people in my life.  In just a couple of weeks, I will be celebrating my second wedding anniversary, and the week after that, I will be flying home to see my family (with whom I can’t wait to test out these new recipes!) after almost a year.  These are the things I don’t want to lose sight of as these difficult days float by.