At the last minute, our school decided to extend the Bayram holiday by a few days, which suddenly meant we had eight days off instead of four, which is a game-changer when it comes to vacation time.  However, having just landed in Turkey and started new jobs, vacation had honestly been the last thing on our minds.  We were suddenly met with the kind of dilemma we’d only ever dreamed of having:  where do we go for vacation with all of this free time?

Since it was last minute, we knew that prices would likely not be in our favor and we weren’t eager to burn through a bunch of money before even getting our first paychecks.  Our original plan had been to go somewhere within Turkey, but we were told by numerous people that we may want to avoid it since everyone would be travelling for the Bayram.  So we started searching.  We looked through countless hotel and flight booking websites, hoping that the perfect place would just jump out at us; it didn’t.  After hours of banging our heads against our desks, we stepped away from our computers to do a bit of thinking (and napping).

We had strongly been considering Greece due to the lowered prices, thanks to the recent economic crisis, but the prices weren’t quite as low as we’d hoped, especially if we went out to the islands, which is what we wanted to do.  We looked into Bucharest, but we just didn’t feel like we knew enough about it to have sufficient time to plan a decent trip.  Finally, against all advice, I started perusing some Turkish destinations, which still had fairly reasonable flight and hotel prices, despite the fact that we were booking at the eleventh hour.

Turkey is full of amazing vacation spots, but we settled on Antalya for a number of reasons.  First of all, because I was dying to go to a beach somewhere, having lived most of my life in landlocked Kansas and the blue Mediterranean waters were really calling to me in every photo I scrolled through.  Antalya is also home to some incredible historical ruins from ancient Greek and Roman civilizations that once occupied the area.  Oh, and there are mountains too.  Win, win, win. 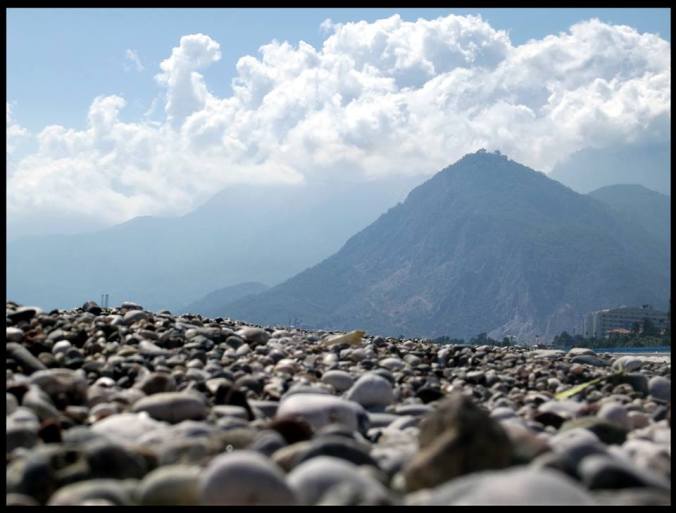 Our adventure kicked off with a bang when we were seated next to a Turkish woman on the plane who spoke virtually no English.  Still, she was very friendly and seemed very curious about us, so we struggled through the conversation in caveman-level Turkish with the help of an old Lonely Planet phrasebook we had nicked from the office.  Once we landed, our new friend seemed quite protective of us, even offering to haggle with the taxi drivers to make sure we got a fair rate!  Turkish hospitality at its finest.  I knew then that this was going to be more than just a vacation; it was going to be a learning experience.

Hadrian’s Gate, the entrance to Kaleci.

First on our list was Old Town (Kaleci), which is a well-preserved historic district of Antalya and home to sites such as Hadrian’s Gate and the Broken Minaret.  The streets of Old Town were gorgeous and bursting with charm, with stone buildings and hanging flowers everywhere you look.  The tunnel-like cobblestones streets lead out into a gorgeous marina with an amazing view of the sea and mountains and a lovely walking park full of beautiful palm trees and colorful flowers.  We spent a good chunk of the morning just taking in the views.

The streets of Old Town

Now for the not-so-charming thing about Kaleci:  there is a very active swindler scene.  While I definitely recommend wandering the streets and perhaps stopping to eat, it’s important to exercise caution before buying anything in the shops.  They are certainly pleasant to look at, but you will find that very few things are labeled with prices, which most likely means that they are overcharging foreigners who don’t know any better.  Whether it be a taxi, restaurant, or shop, don’t go in or buy anything that don’t have prices displayed; it’s probably a trap.  You also, unfortunately, have to occasionally ignore pushy shopkeepers and cafe owners who will actually come out on the street and try getting you into their shop.  One ice cream guy in particular started screaming at us when we told him we didn’t want any ice cream.  It was around that time that we decided we’d had enough of Old Town and stepped out into the city for lunch.

Next on our agenda was to hit the beach, which was probably the highlight of the whole trip (duh!).  Our hotel was only a ten minute walk from Konyaalti Beach, a stunning pebble beach that was not terribly crowded.  The sun and breeze were amazing and the cool waters were the most wonderful shade of turquoise.  We spent the rest of our day swimming, relaxing, and reading on the beach.  It was perfection.

The stadium at Perge.

We were feeling more adventurous our second day and decided to journey out to see some of the archaeological ruins in the area.  There were tons to choose from, but we settled on Perge because it was the closest and it had pretty good reviews. One thing you learn quickly about Turkey is that it is not terribly organized and rules and procedures change frequently, so you’re best bet is usually to ask someone where to go or how to get there.  Another thing you pick up on is the fact that people don’t like to say “I don’t know”, so they will often make something up rather than admit  that they can’t help you.  It took a few tries before we finally figured out the best way to get to a bus station that could take us out to Perge.

The bus was an adventure all by itself, and quite honestly, the most entertaining part of the day.  Apparently the bus is not only used for transportation, but also delivering packages along the bus route.  People were flagging the bus down and paying the driver to take their boxes on to another person who would be waiting at another stop. One such box, covered in tiny air holes, happened to be full of chirping baby birds.

When we were dropped off, we were a little shocked by the fact that we were basically just dumped off on the side of the road in a tiny village, 3 kilometers from the actual site.  There were a few signs that took us as far as a rural highway, but then the signs suddenly stopped and the ruins were nowhere in sight.  We kept walking nonetheless, doing our best not to get hit by the speeding cars since there was no actual walking path to get there.  We were confident we had missed something somewhere, but when we stopped to ask a village family which way we should go in our crappy Turkish, they confirmed that we were indeed going the right way.

When we finally arrived, we were saddened to see that the theatre (which is the crown jewel of the ancient city) was closed for renovation, but enjoyed exploring the stadium, which was once home to many a gladiator battle and was built in 100 AD. For being over 2,000 years old, the place is remarkably well-preserved.

On our way out, we got caught in a rainstorm and were cursing our luck when a kind stranger pulled over to offer us a ride.  Against all advice that our parents had ever given us about strangers in cars, we hopped in and had our first encounter with the art of hitchhiking, which is actually quite common here (our teenage students do it regularly).

We ended our evening with one of the best meals I have ever eaten at a very nice seafood restaurant.  We enjoyed crisp salads, freshly caught Mediterranean grilled sea bass, honey roasted figs with ice cream, and endless cups of tea and Turkish coffee (courtesy of the manager…gotta love that Turkish hospitality ;)) all for about the cost of your average meal at Applebee’s.  It felt oddly oxymoronic after traipsing through ancient ruins in a village in the middle of nowhere.

It was still raining the next day, so we decided it was a good day for checking out some shops and museums.  The Antalya Archaeological Museum did not disappoint.  There were some amazing remnants of old Greek temples and statues, as well as prehistoric tools and pottery, all of which were originally found in the Antalya region. The rain even stopped just long enough for us to enjoy the beautiful outdoor gardens. 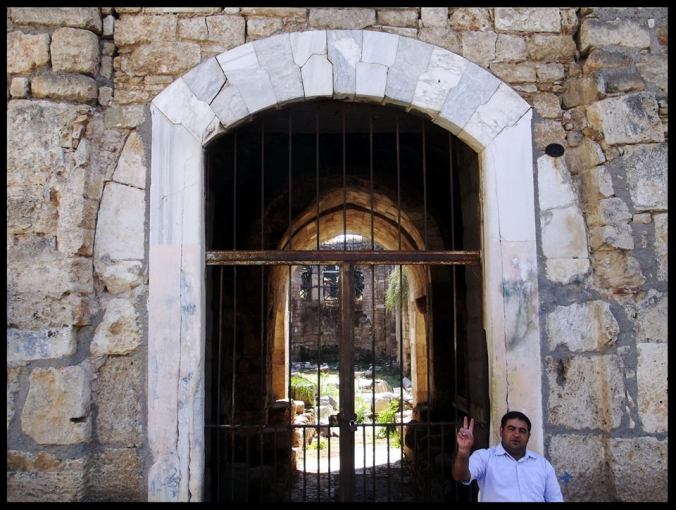 We spent the majority of our last two days circulating between the beach and various ice cream and coffee shops, all of which we could not get enough of.  The weather was lovely, the ice cream was delicious, and coffee and tea are never a bad idea – especially not in Turkey.

It was a truly incredible adventure.  Taking off on our own in a brand new country, whose language we can barely speak (and this is a country where you really do need it – almost no one spoke English in Antalya) two weeks after moving felt a bit daunting at first, but once we realized we really could do it, it felt amazing.  We left Antalya with a deeper understanding of our new home, a better grasp of the language (although we still desperately need lessons), and a lot more confidence in ourselves.